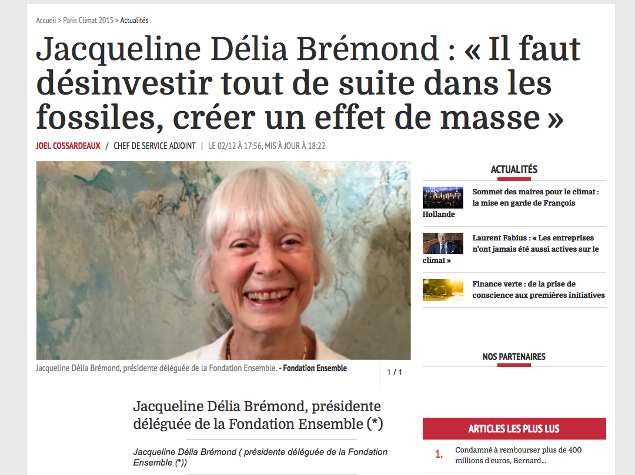 Jacqueline Délia Brémond, Fondation Ensemble’s Co-chair, was in Le Bourget on the COP 21 premises on December the 2nd. She contributed as a speaker both in a press conference and a public conference about the Divest-Invest pledge to which the Foundation committed last November.

She was interviewed in the French lead economy newspaper, “Les Echos” (the interview is here, in French). There is also an article in the same newspaper about the Divest-Invest movement, here.

Sharing the floor with Pascal Canfin (WWF France Director), Stephen Heintz (Chair of the Rockefeller Brothers Fund), and Mary Boeve (Executive director of 350.org), articles have also been published in the Novethic magazine (in French) and in the Santa Barbara Independent.

Furthermore, Jacqueline Délia Brémond spoke during a foundations meeting on the Divest-Invest movement on December the 8th (check the following news).